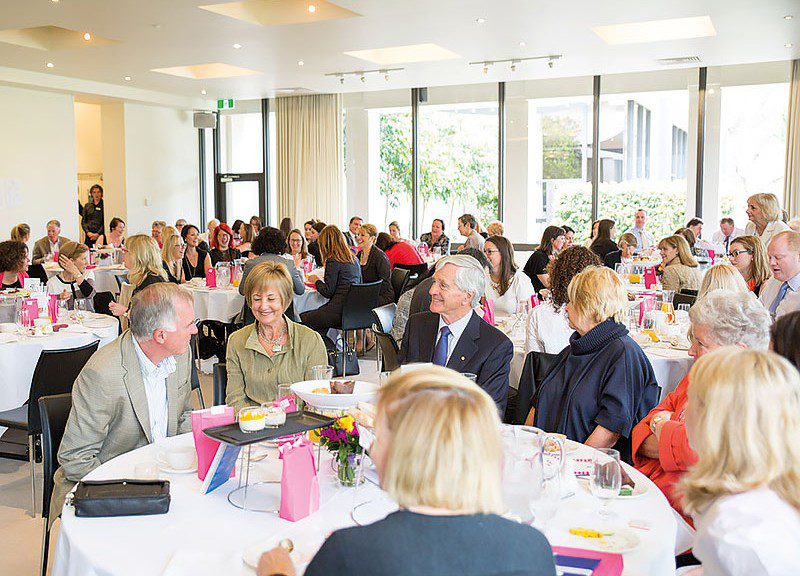 It was a bright start to a beautiful day with over 100 guests joining us for the Mary Ward International Australia (MWIA), inaugural breakfast in Melbourne to acknowledge the United Nations International Day of the Girl Child on 10 October 2014.

With guests gathered at Leonda By The Yarra, Hawthorn to support this annual event, the room was filled with enthusiastic conversation amongst many new and old friends.

This is an important day for Mary Ward International Australia to acknowledge as we aim to support girls locally and internationally to receive the education, skills and support they need to transform their lives and the world around them.

Our passionate and engaging guest speaker, Victoria Anderson, a past pupil from John XXIII College in WA, soon had the room quiet with her remarkable story of how she became involved in the plight of trafficked children in South East Asia.

Like Victoria, our own Loreto sisters who live in all corners of the world are working hard to address the issue of human trafficking. At a recent worldwide gathering of Loreto Sisters in Spain, a corporate stance was taken, “as members of the Institute of the Blessed Virgin Mary, an international and multicultural congregation of women religious, we pledge to work for the eradication of all forms of human trafficking and its causes, particularly among women and children, wherever we live and minister.”

In Albania, Sr Imelda Poole ibvm works with victims of trafficking whilst raising global awareness against the phenomena of modern day slavery. In India, Mary Ward International works in Kolkata and Darjeeling to protect girls from being sold as a commodity. We are pleased to share one recent success story which has come out of the Kolkata Mary Ward Social Centre (KMWSC). Recently, a 14-year-old girl called Geeta, who is associated with a Loreto outreach program, went missing. Through a close network of people it was discovered that she had been trafficked to Uttar Pradesh in Northern India, almost 1,200 kilometres from Kolkata. Through further investigations Geeta was found working as a dancer in a bar. The Mary Ward International network in Kolkata worked closely with the authorities to rescue Geeta, along with 7 other minors from this bar, who were soon to be sold elsewhere. Adding to this remarkable story, the accused are now behind bars. This is testament to the work our wider International Mary Ward network plays in making change. Loreto schools and non-formal education centres around the world work tirelessly for and with some 60,000 girls.

Mary Ward International Australia looks forward to expanding this annual event, highlighting the rights of girls worldwide, into other states around Australia in the years ahead.

About the United Nations Day of the Girl Child

Just three years ago, the United Nations adopted Resolution 66/170 declaring 11 October as the International Day of the Girl Child (IDGC) to recognise girls’ rights and the unique challenges girls face around the world.