In early December 2019, a dream that had developed in the hearts and minds of medical superintendent Dr. Kabwe and the staff of Lukulu District Hospital for over two years was answered with the delivery of a brand new ultrasound machine. This dream was realised through the support and hard work of Mary Ward International (Australia) who sought donors and eventually partnered with Kindermissionwerk (Germany) to achieve this goal.

The Loreto Sisters in Lukulu always attempt to respond to needs as expressed by the local people themselves. In November 2017 when Sr Pat Hanvey IBVM was speaking with Dr. Kabwe about the possibility of a volunteer sonographer coming from Australia (MWIA), he remarked that their real need was an ultrasound machine. The machine they were currently using was decades old, unreliable, and had the potential to break down completely without warning, thus leaving workers without any scan facility at the hospital. The need for a new machine was referred to MWIA, who immediately responded by applying their great motivation and expertise to address this matter.

While the project proposal was being developed and funding sought, the hospital reported that the old machine had indeed failed beyond repair. They were without any ultrasound facility for a significant period until the Provincial hospital lent them an old machine, which itself was prone to failure and had to be repaired several times after arriving in Lukulu. 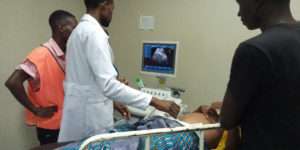 The new machine was delivered and set up at the hospital on the 13th of November 2019 and basic training conducted for all staff who would be using it. During the training, an emergency of a suspected ectopic pregnancy arose. The room was duly vacated aside from the radiographers and technician providing the training as this was the only room suitably set up and available for such an examination. Immediately the training session turned into a practical test for the radiographers as the new machine was quickly utilised to examine the patient. The team was able to assess the case and determine that it was not an ectopic pregnancy but rather a large cyst.

A handover of the machine to Lukulu District Hospital took place on Friday, 15th November, at which the District Medical Officer officially received the machine from Sr Pat in the presence of the District Commissioner of Lukulu. Both spoke highly of the great benefit the machine would bring to the people of Lukulu and expressed their appreciation for the hard work and generosity of the donors who made such a huge asset possible.

The machine will be of vast assistance, particularly in prenatal and maternity care, and will support alleviating the prominent issue of child and maternal mortality and morbidity that prevails in the Lukulu District, as it does elsewhere in Zambia. The acquisition of this equipment directly addresses SDG 3 in the local area:  Ensure healthy lives and promote well-being for all at all ages.