Paving the Way to a Better, Brighter Future 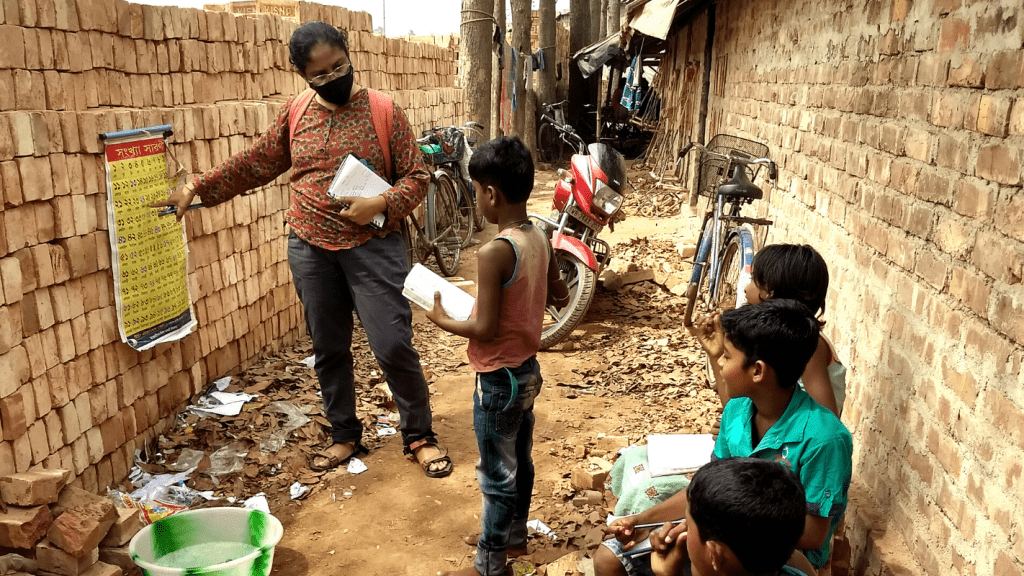 Over the turn of the century, India’s rapid economic growth and urban transformation has meant it is fast becoming one of the strongest economies in the world. However, India also battles the parallel realities of extreme poverty, high illiteracy, female infanticide, forced marriage, gender inequality and more. This journey is paved with developmental challenges, including the ever-widening gap between the rich and poor, forcing countless children into child labour. Reports estimate that 10.1 million* children are engaged in unorganised labour work in India.

Presently, one of the largest groups of children engaged in labour and out of school are those of itinerant families that work in open-air factories where clay bricks are made by hand – otherwise known as Brickfields.

The Brickfield industry relies on the manual labour of migrant and itinerant workers, including children, to minimise production costs. They spend up to eight months of the year in dusty fields in temperatures that can reach 40 degrees with no access to basic facilities like clean drinking water or toilets. Despite working arduously for over twelve hours a day, these workers barely earn enough to feed their families due to exploitative practices, unfair compensation, and lack of awareness about their rights. The most disheartening of all things is that children from the age of 10 work alongside their parents in these harsh and inhuman conditions. Our colleagues on the ground are repeatedly told by parents that “if the children don’t work, there will be no money to feed them. They work, they eat.”

It is no surprise that for these families struggling to survive daily, children’s education is viewed as a distraction from much-needed earnings. This lack of awareness is generational. Due to their own shortage of opportunity, most parents have never gone to school or experienced life beyond the Brickfields.

Since 2008, our colleagues at the Kolkata Mary Ward Social Centre (KMWSC), supported by our MWIA donors, have operated open-air schools in the Basirhat area of West Bengal, India. The schools deliver quality education, life-skills training and health awareness programs to the children and broader families of the Brickfields community. The absence of government-aided schools makes the Brickfield schools the only source of education for the children of workers, the only hope for a better, brighter future. Parents incur no financial costs to send their children to school; in fact, to encourage more participation from the community, the children in these schools are incentivised with free study materials and a nutritious meal at the end of each school day.

Since lack of awareness is a prominent challenge in the community, KMWSC’s Brickfields initiative has a strong focus on raising awareness amongst the itinerant families on social issues such as child protection, the right to education, child marriage and their right to participate in, contribute to, and enjoy economic and social development. In 2021, KMWSC held over 30 health awareness camps for more than 2,000 children and their parents, imparting vital health information, vaccinations, hygiene products and more.

With the support of MWIA, the KMWSC operates ten Brickfield schools in which nearly 700 children from 402 families receive quality education from 22 teachers trained in the special educational needs of the Brickfield students. This project also promotes collective community development by training and employing people from within the local community as teachers and other associated roles.

These initiatives empower and educate hundreds of children from the Brickfields. Thanks to your support, we can continue giving each child the best opportunity to break the poverty cycle through education.

A Message From the Fields

Purnima Karmakar has worked as a teacher in the Brickfield schools for over six years. A resident of the Basirhat area of West Bengal, India, she finds purpose, contentment and joy in educating the children of the Brickfields community and contributing to their growth and development.

When she began her journey as a teacher, she had just graduated from secondary school and had insufficient savings or income to pursue higher education. However, thanks to KMWSC’s Teacher Training Program, Purnima had the opportunity to receive hands-on training through teaching the underprivileged children of the Brickfields while simultaneously earning a stipend to cover the cost of her degree.

Purnima says that approximately 90 trainee teachers out of 120 had or were currently utilising their stipends to pursue degrees. Although the schools are situated in remote areas and lack access to public transport and basic amenities like toilets, Purnima cycles daily to the Brickfields to share the gift of education with these children most in need. She says:

“These children are my pride and joy. Their well-being and safety are my topmost priorities. There was once a child who had developed severe breathing problems, it was evident that he wasn’t well and needed to see a doctor immediately, but the parents were reluctant to take him to the nearby hospital because they didn’t want to spend any money. My colleagues and I tried to explain the gravity of the situation, but they constantly refused all our pleas. Eventually, us teachers gathered and contributed towards the check-up and follow-up medications. The boy is now healthy and regularly attends school. For me seeing all these children progress and to help pave the way for a brighter future is my biggest accomplishment and I will always try to help them to the best of my abilities.”